Once upon a time in the ancient period Ashurargal like Tharagan destroyed the whole world. So Lord Indhiran thought to control or kill them with the help of Agni Deva and Vayu Deva gods. Agni came to the world. By seeing the Devas, Ashuras went inside the sea, Agni Deva thought that they died. But Ashuras came back and again they continued to destroy the world. By seeing this, Lord Indiran was angry with Agni Deva and told him to suck the sea and kill them. But Agni Deva told , "if I do this, whole universe will be disturbed. That karmic debit will be on me" and he refused. So Lord Indiran gave him a curse. "you refused my words so you will have a birth in the world as Kumbam (Acquiries) and you will have to drink the sea water."

In the other side, Lord Vishnu had a birth as Dharuman and in certain age, he started Chant. To spoil his chant Lord Indhiran had sent Apsaras. Although Dharuman did not infatuate on them. So that he created a beauty queen, named as Urvasi from his thigh. Urvasi married a person named Mithiran. In this situation, seeing the beauty of Urvashi, Varunan was in infatuation and he loved her, he expressed his love to Urvasi. But Urvashi had already married. So she refused the love of Varunan. But Varunan requested her that “if you don’t expect my love, just think about me, when you are having sexual interaction with Mithiran. That will be enough to me” he said. But without knowing about future Urvasi accepted Varunan's request.

According to this one day when she was with Mithiran she thought of Varunan, knowing this Mithiran gave her a curse that "you have to birth in world as a girl and you will have to be the wife of Purooravan." But the sexual relation with Mithiran-Varunan expressed in a kumbam (Acquiries) from that a person named Nimi had a birth.

One day Nimi was playing with many girls in that time Vashistar passed on the way. But Nimi did not respond him. So Vashistar got angry on him and gave a curse that you should not have body for your soul, Nimi also cursed the same to Vashistar, because of the blessings of Bhramma.

Without the body, Vashistar went inside the Mithra-Varuna kumbam. After some periods from that kumbam, Vashistar came out of it. And then shri Agasthiyar came with four hand and kamandalam. Because of the curse of Indhiran, Agni Deva had a avathar as Agasthiyar in the world. His powerful chant and yoga sidhi’s he got all the powers. According to the indhiran’s curse Agathiyar sucked the sea water and killed the Ashuras with his sidhi power and also he destroyed the poison of sea. By seeing this, all mummoorthi’s (Lord shiva, Vishu and Brahmma) gave blessings to Shri Agathiyar to be as a sidhar for billion years in future in the south.

HOW HE CAME TO SOUTH? 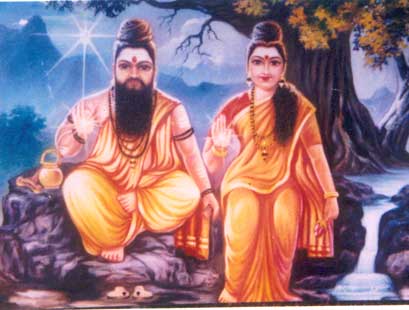 Lord Shiva & Parvathi had a argument about the other birth for the human beings according to the karmic debit & credit. For that, they chose Agathiyar and asked him to have research about it and to write about life and birth. He made research about human life and wrote in the palm leaf about their birth according to their karmic debt. To identify one's leaf he classified the thumb impression as 108 names and he separated it like a top, middle and low by certain lines.

When he was in the research of human life in the south he had seen many Rishi are in the tree upside down. Seeing this Agathiyar questioned them, they said our family-wise named person Agathiyar had not entered into family life and he is having a karmic debt so that our soul hadn’t got Moksham(Heaven). By thinking of the above, Agathiyar went to Vidharpa country and married Uloba Muthirai, who she was born by the Yagam (prayer for Lord Agni)of that king. By that, he rectified his karmic debt and his ancestors got moksha.

After this Agathiyar went to pothigai hill and with the blessing of Lord Subramani (Karthikeyan) he learned Tamil language and developed. But when we came to know the history of Agathiyar there we will be able to know that there were many histories & stories about Agathiyar life. In the name of him many of them were lived like Vadhapi Agasthiyar, Ulbo Agathiyar, Podhiya Agathiyar like that. By seeing the names we have a doubt that all will be the one, who is the Agathiyar.

But if all this is in another side also when we come to know about Naadi Astrology, Siddhas, siddhas medicines, we will be remembering Agathiyar maharishi. Regarding naadi astrology and medicines nowadays also we have many questions and doubts but in that ancient period itself with his power, he had explained all about those in his palm leaves by which we predict you.

By knowing all these details the Naadi Astrologers, who are from the valluvar's family predicting in this century also.